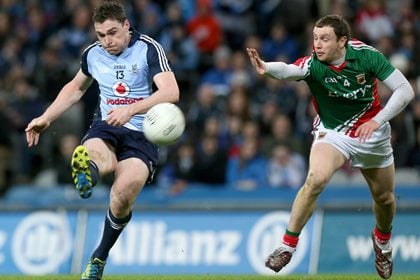 Dublin's Paddy Andrews and Keith Higgins of Mayo ©INPHO/Ryan Byrne
An impressive 1-10 by Bernard Brogan helped Dublin to a 2-14 to 0-16 win over Mayo at Croke Park tonight.

The big news before the game was that Ciaran Kilkenny was in from the start as he returned to action following his spell in Australia and all eyes were on the Castleknock forward.

But, it was Brogan who simply ran riot over the course of the 70 minutes with 1-4 of his tally coming from play. The dubs played the majority of the second half with 14 men after Ger Brennan was sent off, but they kicked on to record an impressive win.

A foul by Ger Cafferky on Bernard Brogan in the opening five minutes gave Dublin the first scoring opportunity of the evening and Brogan pointed the resultant free. And two minutes later the same player knocked over another close range free to make it 0-2 to 0-0 after seven minutes.

Brogan then opened his account from play after he took Cafferky on one on one and slotted over a fine point. The Dubs were winning a lot of ball at midfield, as Mayo made a flat footed start to the match.

Mayo finally got off the mark when Aidan O'Shea, who was lining out in the uncustomary position of centre forward scored a fine point. Then Enda Varley was fouled and Jason Doherty slotted over the free to make it a one-point game 0-3 to 0-2 after eleven minutes of the match.

The sides were level when Doherty converted a free from 50 metres out from goal close to the sideline as Mayo came more and more into the game. And it was the Connacht men that hit the next three scores as Varley, Lee Keegan and Doherty kicked fine points from play to make it 0-6 to 0-3 after 16 minutes.

Thirteen minutes passed before Dublin and indeed Brogan got their next score to reduce the gap to two points. Brogan hit his fifth of the night when a high ball came in and he managed to get his fist to the ball ahead of Mayo goalkeeper Kenneth O'Malley and it went over the bar.

The sides were level a minute later when, who else, but Brogan kicked another from play as the Dubs were certainly on top around the middle of the field. They totally took over and the next 1-2 came from Dublin with Brogan accounting for 1-1 of that with a Peadar Andrews point sandwiched in between.

The goal was worthy of the entrance fee alone as Brogan and Flynn played a one two before the former fired to the back of the net to make it 1-8 to 0-6 by the 30 minute. Mayo finally ended the rot when Varley kicked a fine point off his right foot and this was followed by a point from Michael Conroy.

Mayo made the perfect start to the second half when they kicked three points without reply as Doherty (2) free and play either side of a Keegan point drew the sides' level. Dublin went ahead once again, but they were reduced to 14 men when Brennan received a straight red card for punching and kicking out at Donal Vaughan.

Then Kevin McLoughlin pointed, but Dublin had the chance to get back into it when Peadar Andrews was brought down by Vaughan and Stephen Cluxton came up from the goals, but his effort was brilliantly saved by O'Malley.

A minute later and O'Malley was called into action again when he saved from substitute Kevin McMenamin. Mayo went down the field and the impressive Doherty scored another fine point from play to stretch their lead.

However, McMenamin soon made amends when he crashed the ball to the back of the net after a great ball in from Kilkenny and the Dubs were in front once again by 2-10 to 0-14, just 15 minutes into the second half.

The 14 men of Dublin really dug deep and an Andrews point was followed by two excellent scores from Brogan, the second of which was an outrageous score from the wing, which brought his tally for the evening to 1-9.

Good work by Conroy saw Keegan in on goal, but the All-Star blasted over with the goal at his mercy to leave it 2-13 to 0-15. Mayo had the chances to close the gap, but the excellent Brogan fisted over the bar in the 69th minute to put five points between the sides.

McLoughlin pointed a free in injury time, but this was the last score of the match as the Dubs maintained their winning start to the campaign.