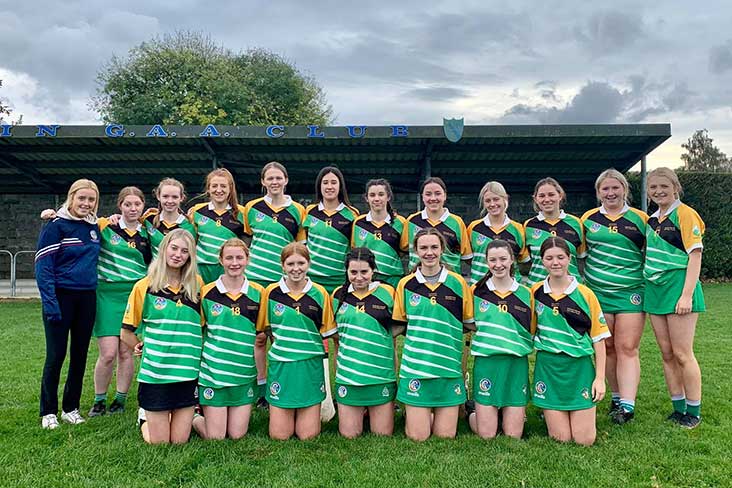 Our under 9s took part in a blitz in Belmont on Saturday morning where they played Drumcullen, Belmont and Kilcormac/Killoughey.

Our Kinnitty/St Sinchill’s Minor team had their second outing in this year’s championship when they took on Shinrone in Killurin on Saturday afternoon.  The girls went into the game keen to put the memory of their first outing behind them having lost heavily to St Rynaghs.

Before the game started the girls learned that Shinrone did not have a full team so the game started with 13 players aside.   The girls started the match well with Jennifer Higgins opening the scoring with a point after just a minute of play but that was to be our only score for a period of time as Shinrone hit 1-3 in a row, their goal coming from a free that was saved by Alannah Dooley in goals only for Shinrone to finish the rebound to the net.  Caoimhe Carroll hit over a free just before the water break to stem the flow of Shinrone scoring.

The second quarter of the game was quiet in terms of scoring with the only score coming from Bridin Walsh when she scored our third point of the game.  The only other incident of note came when Ava Moloney went off injured for Shinrone leaving them down to 12 players.  There was as debate as to whether Kinnitty/St Sinchills were obliged to take off a player but the home team kept their full complement of players on the field.

After half time Shinrone returned to full strength and boosted by this, they got off to a flying start scoring a goal and a point within a couple of minutes of the restart.  Caoimhe Carroll hit over a free and Nicola Cleary replied with a long range point for Shinrone before Caoimhe converted a brace of frees.  Momentum was now with our girls and they were rewarded further with a goal by Jennifer Higgins to leave Shinrone leading 2-5 to 1-6 when John McDonnell blew for the 2nd half water break.

When play restarted Caoimhe pointed again from a free to leave the minimum between the team.  Nicola Cleary restored Shinrone’s 2 point advantage before Rebecca Moyles reduced the margin again.  Our girls worked to try get an equaliser but Nicola Cleary hit over again for Shinrone to leave 2 between the teams and while Caoimhe hit over another free unfortunately that was the final score to leave Shinrone taking the spoils with a one point win.  Final score 2-7 to 1-9.

A one point defeat is always tough to take but it has to be noted that the margin would likely have been much greater if it wasn’t for the performance of Alannah Dooley in the Kinnitty/St Sinchill’s goal.  Well done Alannah.